The Other Lionel White 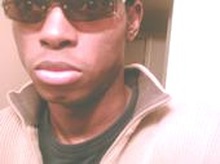 Lionel l. White - is an indie / alternative rock  musician / songwriter / author from Virginia Beach, Virginia, USA. He uses the stage name: Luciano Illuminati. He plays the following instruments: acoustic guitar, electric guitar, bass, keyboards, drum programming and percussion instruments. He played trumpet throughout middle school and high school classical bands, then played tuba in the marching band at Salem H.S. He uses his versatile voice to sing rock and r&b style songs and he also speaks the lyrics in some of his songs.

He founded SPOIO Inc. in 2008. He services as its CEO. SPOIO owns SPOIO.com, SPOIO Books is the publishing division &  SPOIO Records is the recording division. FreeRockRadio streams free rock music and videos and offers promotional services. ThatHotness is the sister site for Hip Hop, R&B and Pop music videos. The company also runs some other sites and apparel brands as well. For more details,

This Mr. Lionel White is a freethinking, song & business writer and firm believer in human rights. He believes in freedom of speech, freedom of and from religion, separation of church and state and the basic right for all humans to live free.

He is the author these books:

Wealth Building Strategies of the Super Rich:
How to start a Family Dynasty